In a very self-centric post, I recall my 2018 while trying to espouse decision-making wisdom.

Since the rebirth of my personal blog this year, though, it feels appropriate to do this. This is as deep as I get here as far as talking about myself.

The year basically started (January 3) with onboarding to EY, who'd finally closed the acquisition of my old company at the end of 2017. I flew from Syracuse, NY to Philadelphia to coop up with my beloved coworkers in the Sofitel. My girlfriend had me obtain many little French shampoos.

From there I headed to Atlantic City (via New York...) for weekend after New Year's. This is the cheapest weekend of the season - possibly the year - to hit up Atlantic City. Check the rate calendar. Average people all gamble New Year's (Eve), the worst time to gamble. The most expensive time.

Funny enough the main reason for going was for my roommate to test his "roulette system." Astute readers will know there's no ultimate winning system for roulette. He lost some $1200 while I played Martingale on low-stakes roulette machines to turn $200 (my budget!) into $350. Or said another way, dinner at Morton's.

Then my sister came to visit in New York. We saw The Killers in Madison Square Garden, standing about 10 feet in front of them. I bought these tickets for $180/p off Stubhub before normal Ticketmaster sales. These were worth $900/p the week of the concert (sold out). There's a lesson in there.

Me personally, I think one quality concert experience is enough per year. Versus many shows with crap tickets.

We also went to Brooklyn Botanical Garden with my girlfriend.

Maybe that seems like a lot of excitement to start the year, and you're right. Things started to slow down a lot.

However, after the EY acquisition mentioned earlier, the clients I go to needed a while to transition contracts over.

In a way this slowdown was nice, though, because it allowed trips to Syracuse that might not have happened otherwise. One for snowmobiling. One for the funeral of my dad's friend.

On this blog previously I evaluated options for travel between Syracuse and New York. I now take Amtrak business class almost exclusively. This is very pleasant despite taking a little longer.

Is it more expensive? Yes. But you can leverage pre-tax commuter benefits on Amtrak purchases. You can't, however, for UberX to and from Penn Station.

My sister also visited again. We sat in the Good Morning America audience to see the Jersey Shore people.

As you can maybe see, I myself stopped (indoor) tanning like I've done on and off for years. Not because I'm afraid of cancer. But of premature aging.

Around August, my work travel picked back up. I spent a good ten weeks of my year outside of Philadelphia overall.

This was very welcome and also allowed a good bit of "add-on" travel, stretching rental car and/or hotel for nearby mini trips.

One of these was a Steelers versus Browns game in Pittsburgh (granted it was in October, chronologically out of line here).

And several trips to the New Jersey Six Flags where my girlfriend and I ended up getting season passes.

My one "big trip" of the year was taking a cruise from Denmark to Russia and back with my grandmother.

She had broken her leg before last Thanksgiving and not long-after we planned this so she'd have something to look forward to in rehab. We have been on a great deal of trips, including traveling across Italy and traveling across China (separate years). 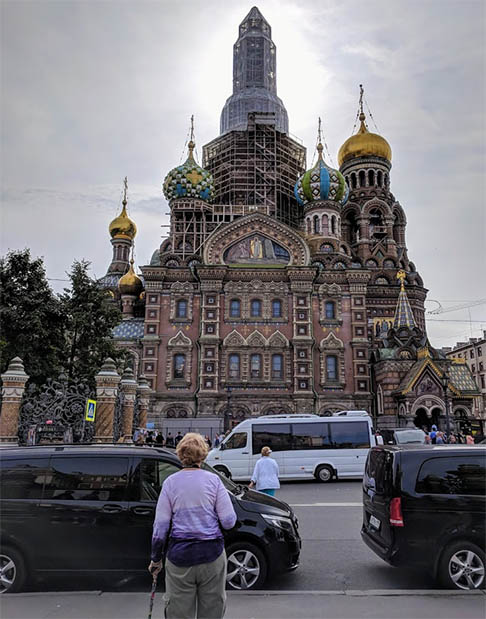 All in all, we stopped in seven countries.

I would recommend taking a cruise like this as an inexpensive way (relatively speaking) to sample a bunch of European countries. Then you can plan longer future travel to what you like.

Definitely spring for a balcony room. I would not cruise without having a balcony room. It's just really nice to be able to sit out and watch stuff go past. On our China river cruise we appreciated this a lot also.

Anyway, it was really relaxing to turn off email and responsibilities for two weeks. Of course, having Google Fi as a mobile carrier, I had full strength data in every place we stopped. (And frequently also at sea!)

But that's not the point. 😉

I'll call out a couple "hacker conferences" I attended and enjoyed overall.

One was Hackers on Planet Earth (H.O.P.E.) which I'd actually never heard above before a client brought it up. I bought a ticket to go hang out with him but ended up finding it to be like a New York DEFCON.

The crowd was very similar to DEFCON, granted the last one I attended was 2016. The talks struck me as similar too. You had a broad range of security talks, and most didn't get too technical. There was a big emphasis on personal freedoms of all sorts.

That was late July. In late October, I attended CodeCamp NYC as I did last year. This is a developer conference with minimal security stuff. There might've been one or two, but very high level (for developers obviously).

One conference I didn't like was BSides NYC back in January. It was at John Jay College and the logistics were disappointing.

First, they ran out of coffee. Around 9 AM. At an information security conference.

Second, the two main rooms where interesting talks were filled up consistently. They'd hold 100ish people then not allow anyone else in. I caught a good talk about hacking medical devices in a main room, but then was banished to dull little talks in a side room.

Also kinda related - I participated in my first hackathon. It was an insurance-for-good type thing, sponsored by EY, called "Agents of Change." That two-day period was extremely stressful.

Don't do a hackathon thinking it'll be fun. It is useful for testing your limits as a programmer (and more generally as a human).

If you got through this section of my post you might like my cybersecurity blog War+Code. It's even more neglected than this one but gets technical on security.

For the hell of it I'll get granular and detail what my New Year's Eve was like. I feel this shines a lot of light into (1) how I behave on "vacation" and (2) my decision-making in general.

My sister and I had breakfast with our high school Italian teacher. She's one of the few memorable teachers from high school and actually cares about what she teaches. My sister and I both went on trips to Italy at about 16 because of her. That trip changed my entire life.

Then I played video games with friends in the afternoon before finally getting to the big night out...

Kidding. As an introvert I get diminishing returns on "going out" and already had enough socialization for the day. New Year's Eve is, regardless, the worst night of the year to go out for me because it yields hordes of average (drunk) people.

My most questionable decision of the day was getting Olive Garden to-go with my sick parents.

Tangent 2 - The Killers' All These Things That I've Done is amongst my favorite songs if only because I feel it's somewhat autobiographical. Like Adrian Lux's Teenage Crime.

But this is exactly where I wanted to be. I've become more confident in decision-making as I've gotten older, and stopped doing things for "image". This correlates with my abstinence from social media.

It was nice to think back through the year. I feel New Year's is a time for reflecting on the past year, not making silly "resolutions" for the new one.

Maybe it should be like an agile development retrospective. For the non-technical, this is a team meeting after you've all been programming for several weeks. You talk about what was good in that time and what can be improved.

Up to you - everybody's different!

In my recent review of the "mud" (MUD/WTR) beverage, I aluded to reverse-engineering it. This is that recipe.

Here's what I think of "mud" (sold as MUD/WTR) after a month of drinking in place of coffee.